Blurb: 17 year old Ember Denning has made an art of isolating herself. She prefers the dead. She spends her days skipping school in old cemeteries and her nights hiding from her alcoholic father at the funeral home where she works. When her own father dies, Ember learns her whole life is a lie. Standing in the cemetery that’s been her sanctuary, she’s threatened by the most beautiful boy she’s ever seen and rescued by two people who claim to be her family. They say she’s special, that she has a supernatural gift like them…they just don’t know exactly what it is.
They take her to a small Florida town, where Ember’s life takes a turn for the weird. She’s living with her reaper cousins, an orphaned werewolf pack, a faery and a human genius. Ember’s powers are growing stronger, morphing into something bigger than anything anybody anticipated. Ember has questions but nobody has answers. Nobody knows what she is. They only know her mysterious magical gift is trying to kill them and that beautiful dangerous boy from the cemetery may be the only thing standing between her and death.
As Ember’s talents are revealed so are the secrets her father hid and those in power who would seek to destroy her. What’s worse, saving Ember has put her cousins in danger and turned her friend’s lives upside down. Ember must learn to embrace her magic or risk losing the family she’s pieced together. 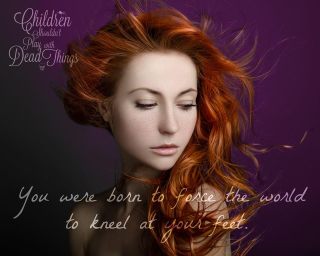 Blurb:
Nineteen-year-old Ivy Redd’s talent with a needle and thread has earned her a spot on a coveted reality TV art competition set in New York’s Metropolitan Museum. The prize: a significant amount of money and instant acceptance into the Masterpiecers, the school that ensures new artists fame and fortune. Her talent has also thrust her and her twin sister, Aster, into the spotlight.
Not that Aster needed help with becoming a media favorite. She managed that on her own by running over a wanted mobster. She told the police it was self-defense, because she couldn’t tell them the truth—the truth would make her sister look bad.
Locked in an Indiana jail to await her trial, Aster watches Ivy on the small TV hanging in the dayroom. It’s the highlight of her day, until she finds out what her sister truly thinks of her. Then, observing her sister becomes a punishment far crueler than imprisonment. 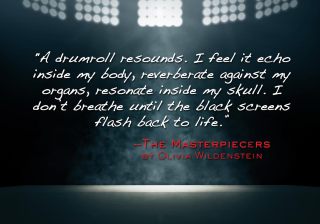 Olivia Wildenstein grew up in New York City, the daughter of a French father with a great sense of humor, and a Swedish mother whom she speaks to at least three times a day. She chose Brown University to complete her undergraduate studies and earned a bachelor’s in comparative literature. After designing jewelry for a few years, Wildenstein traded in her tools for a laptop computer and a very comfortable chair. This line of work made more sense, considering her college degree.
When she’s not writing, she’s psychoanalyzing everyone she meets (Yes. Everyone), eavesdropping on conversations to gather material for her next book, baking up a storm (that she actually eats), going to the gym (because she eats), and attempting not to be late at her children’s school (like she is 4 out of 5 mornings, on good weeks).
Wildenstein lives with her husband and three children in Geneva, Switzerland, where she’s an active member of the writing community.
Author Links:
Amazon: http://amzn.to/2ahtHJw
Goodreads: https://www.goodreads.com/author/show/13734301.Olivia_Wildenstein
Twitter: https://twitter.com/OWildWrites
Facebook: https://www.facebook.com/owauthor/
Web: http://oliviawildenstein.com/
Fan Group: https://www.facebook.com/groups/931818316929131/
Buy Link:
#Free with #KindleUnlimited
Amazon: http://amzn.to/2ahOQk9

“Our mother used to say that Ivy sucked all the good from the womb and I was left with the scraps. I hate to think she was right about anything, but my twin sister is exceptional.
“You’re going to do so well,” I tell Ivy, squeezing her hand.
“No touching,” barks the guard watching over us.
It’s just the two of us in the visitation room.
Ivy yanks her hand out of mine. “I don’t know about so well, but I’m going to do my best.” She links her fingers together in a business-like manner. “Has Josh come to see you yet?”
“No.”
“He told me he spoke to your warden about letting you watch the show. You have his permission to look at it whenever you want.”
I give her a weak smile. “That’ll be the highlight of my day.”
She runs her nail underneath the peeling, synthetic wood surface of the table.
“I’m happy you came to see me,” I say.
Her gaze sticks to the tabletop. It’s as though she doesn’t dare look up at me. I think she’s afraid to cry. “Was it really an accident, Aster?” Her voice is so faint that I have to strain to make out her words.
“Yes.”
“You promise me—”
“Yes,” I say. “Stop worrying about this. By the time you come home, it will be ancient history.”
She bites her lip.
“Now go make history,” I tell her.” 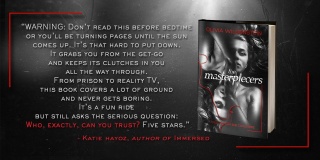