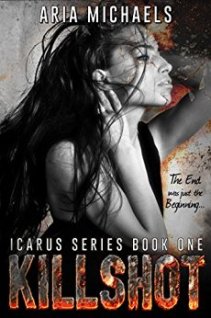 Killshot has been on my TBR ever since Aria Michaels won a spotlight contest on this blog a couple of months back. When the opportunity presented itself to receive a review copy I jumped at the chance and I wasn’t disappointed.

Set in the lead up to, and then aftermath of a solar event “Icarus” we are first introduced to our heroine, Liv, and learn a little about her life. Sadly orphaned and separated from her little brother Lucas, she lives in Foster care, just getting through each day until she is old enough to go it alone and to be her brothers carer. Also fostered with her is the effervescent Riley, an absolute optimist and despite their social differences, is truly like a sister to Liv.  We are in firm high school territory when Riley organises a gathering to view the Icarus event, with her boyfriend Micah, his cousin Zander and an assortment of other friends and foe. Having viewed the beautiful phenomenon, none could have foreseen the tragic chain of events that would then unfold.

A solar storm cuts the group off from the rest of the town, causing them to retreat into the depths of the high school building to survive the freak weather conditions. Liv finds herself an unlikely leader, with survival skills learnt as a child, coming to everyone’s aid, including Zander who clearly has his eye on Liv and she on him. The unlikely group must form a team to get to the bottom of what is going on and to go on a journey to try and save those they love.

This story is much longer than I expected, yet none of it seemed to drag or feel like filler, the prelude to the Icarus event is as short as it needs to be and we are soon thrown into the chaos. The group of friends (or not so much in some cases) are like their very own Breakfast Club, the cheerleader, the popular kids, the genius and the socially awkward, but non feel over done in their roles. The discovery of the horrifying consequences is played out in gruesome detail, the author has an amazing ability to really make you see what it going on in their world, in a no holds barred way (I would suggest not eating a snack during reading).

The journey they must take is fraught with both danger and discovery, leading the plot to places that I would never have imagined when I first started reading. I have no idea if the “science bit” is accurate but it damn well sounds like it is, and it’s clear that a lot of research went into getting things right or at least sounding right.

It’s an emotional read at times, but not in a mushy way, everyone has their own cross to bear and issues are dealt with sensitively without dwelling or becoming too angsty.

This is a fantastic, page turner of a read. Bursting with content and amazing imagery, and whilst yes, it does end on a cliffhanger, it does so at a natural point rather than on a shock which is refreshing.  There are scenes that have stayed with me given their intensity and it’s easy to imagine the book as a movie whilst you are reading.

I’m excited to move onto Ballistic next!

1 thought on “Review of Killshot by Aria Michaels”