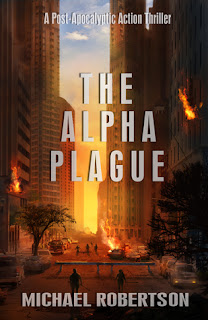 In the not so far off future the second cold war has led to worldwide ban on arms, unbeknown to the majority of inhabitants and workers of Summit City, it’s top scientists are working on a way to wreak war without guns.  Our protagonist Rhys, is a worker within Summit City, low down on the chain, he is tied to a desk next to his ex wife and spends his day working out how to get better access to his son. All that comes crumbling down when an explosion erupts from the area of the mysterious Alpha Tower, the “experiments” come crashing out into the square creating a deadly army of Infected from the first few out the door.  Rhys now faces a race against time to escape Summit City and reach his son before the infected get there first.

This is one intense ride of a story, initially played out in 2 parts between Rhys and within the Alpha Tower itself until both stories come together.  There are parts that will make you not want to turn the page for fear of what is coming next and other parts where your page turning is going as fast as your heart!  It’s a mid length book which adds to the need for good pace (which it has) and the scenes are played out pretty much in real time.  Rhys is a character that you want to root for, he has his flaws and there is a revelation that knocks his halo for a while but ultimately you have to love him, if only for the fact that he’s just as unfit as most of us would be when suddenly faced with constantly running from the infected hoard’s.  It’s these little touches of realism that really ground the story and add to the intensity.

It does end on a cliffhanger of sorts, although that part of the story is done it’s no way near a neat little bow, I shall definitely be reading more of this series!