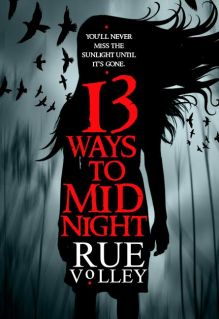 Echo Navarri is the surviving daughter of famous Archaeologists, she was unable to prevent the death of her twin sister Midnight during a tragic accident.  She is haunted with guilt at not being able to do more for her sister and her parents feel it’s best for her to go and live with her Aunt in Port Royal.  Here her world is turned upside down, the free spirited, home schooled traveller is pushed into school with the typical bitchy girls and one particularly hot guy, Thorn.  Enigmatic, elusive and more dangerous to Echo’s emotional well being that she could ever realise.

This is a beautifully written book and ticks all the boxes for the genre.  Echo is clearly struggling with the loss of her twin and forcing her into the mainstream world is a hard transition for her.  Her Aunt though is a revelation and she always brightens each scene she appears in, giving a hint of Grandfather from The Lost Boys.  She is no nonsense and laugh out loud at times, but her story is secretly more tragic than Echo could ever have realised.  Port Royal is not quite home sweet home, there is more than a hint of the supernatural and dangerous goings on, the cause of the constant grey sky, is a sad tale of legend.

The story never comes right out and explains things to you, things are far from tied up in a neat little bow and found myself repeatedly guessing ahead, thinking I knew what was coming, but my suspicions were never confirmed.  For me there was a lot going on in this story without a great deal really happening.  Plenty was being set up and lots of characters were introduced but it was kind of unsatisfying at the cliffhanger ending.  I wanted to know more about the Veil and the creature in the woods, it would have been nice as well to have understood more about the history between the 2 main families, as well as an underlying feeling for me that there may be some more of Midnights story to come.

This is a very accomplished story, with much to appeal to the teen audience and fans of the genre.  The writing is flawless and it’s a series which holds a lot of promise.