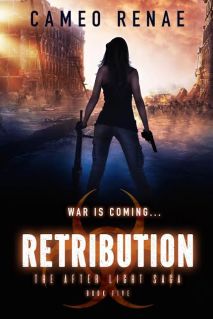 Retribution is the final instalment in the After light saga and I’m so sad to see this series come to an end.  The situation has reached desperation point, no matter where Abi and Finn try to run and hide they are always found, General Drake has seen to that by the manipulation of Dr Simon and the fear mongering broadcasts brandishing Abi a monster who must be captured at all costs.  When Abi’s collection is compromised by a more important diversion she finds herself in a beta research facility where the true nature and heritage of the ARV-3 virus becomes clear.  Even more than before Abi must fight to save those who she loves, she has more friends than she thinks on her side but is her will to keep those she loves safe enough to keep Venge at bay?

I adore this series and Retribution doesn’t disappoint as a finale.  It is non stop action and complete edge of your seat page turning goodness.  Abi’s transformation from simple hive member to full on Arvie fighting machine is summed up so completely by new character Lina’s comment “I thought you were older.”  She has been through so much and yet much more is expected from her, Venge takes more and more every time and Abi knows that there will come a time that she wont come back, which is heartbreaking.   The inevitable must happen though and Abi is placed in an impossible position, but one she must endure for the sake of all those she loves.

I read Retribution in a single sitting, because it’s just that amazing.  As a series, it still manages to surprise you by tricking you into a finale that you think you will be getting but actually giving you the finale that was needed.  There are some characters that I would have loved to have known the outcome for, but then I think it would have impacted upon the pace of the story, so I feel torn.

This remains one of my most beloved series and I wouldn’t have started my blog without it, so for all the ARV-3 survivors I salute you ❤