Blurb:
***2013 InD’Tale RONE Award Finalist for YA****
Did you just see a flash of lightning across the sky on a clear sunny day?
Don’t blame Mother Nature.
Skylar Rome can’t wait to spend her last summer before college with her cousin, Kayla. Everything changes when they meet the Grand brothers. Skylar is sure she should stay away from Mason Grand, but their attraction is undeniable. Then Skylar’s life erupts into turmoil. She steps into a world where descendants of ancient gods have super powers, evil beings chase her, and questions arise about her own identity. She is running out of time and running for her life, while trying to unravel the mystery of what they want from her.
Forced into a battle set into motion long before she was born, will Skylar find the answers she seeks, or will she die trying?

Mary Ting resides in Southern California with her husband and two children. She enjoys oil painting and making jewelry. Writing her first novel, Crossroads Saga, happened by chance. It was a way to grieve the death of her beloved grandmother, and inspired by a dream she once had as a young girl. When she started reading new adult novels, she fell in love with the genre. It was the reason she had to write one-Something Great. Why the pen name, M Clarke? She tours with Magic Johnson Foundation to promote literacy and her children’s chapter book-No Bullies Allowed.
Author Links:
Amazon: http://amzn.to/1QmDZ8z
Goodreads: https://www.goodreads.com/author/show/4388953.Mary_Ting
Blog: http://www.marytingbooks.blogspot.com/
Twitter: https://twitter.com/maryting
Facebook: https://www.facebook.com/AuthorMaryTing
Buy Link: From Gods: http://amzn.to/22puV7Q
From Deities: http://amzn.to/25i7gYC
From Origins: http://amzn.to/22puNW2
From Titans: http://amzn.to/1NNMWdp

“Mason, MASON, MASON!” Skylar panicked.
“I know. Skylar, hold on tight. I’m going to brake.”
“But there are cars behind us.”
“We have no choice. Don’t worry. I got this.” Mason pushed down on the brake forcefully. The car hydroplaned to the right. “Hold on.”
Skylar gripped the first thing her hand found. The water from the road jetted up into the air like in a water show, but the car kept gliding sideways, until finally it spun in a full circle and stopped. With no time to waste, Mason turned it to the right and accelerated, hoping to dodge what was coming toward them.
Out of nowhere, a long piece of ice, taking the form of a spear, darted through the trucks’ tires and punctured some of them. More ice spears came soaring out of the rain, but this time ten or more sphere-like ice balls followed, denting the sides of the trucks. One went through a windshield. With flat tires, the trucks now glided as if skating on ice, maneuvering from side to side.
“Did you do that?” Skylar asked excitedly.
“No. Must be Poseidon’s kids. Where the hell are they?” Mason spread his right arm out in front of Skylar as if to protect her. “Bend down, Sky.”
One of the trucks hit another and veered off, hitting yet another one. The crash caused the trucks to flip and tumble, heading straight for Mason’s car. With a look of shock, Skylar held her breath. There was no time to move, think, or get out of the car, so she closed her eyes and prepared for the crash.
Seconds before impact, Mason’s car flew up into the air and over the trucks. Somehow, as if by magic, the water created a liquid bridge, guiding the car safely over, and then it thumped hard onto the ground on the other side. Without looking back, Mason sped away as the sound of screeching brakes and metal hitting metal blasted behind them.
“What just happened?” Skylar yelped. “Did you do that?” Everything had happened so fast. Adrenaline had rushed through her body so rapidly, she’d had no time for fear. Once it was over, she was amazed and stunned speechless.
“No, I didn’t. Poseidon’s kids. It’s the only explanation. They can manipulate water. I had it handled. There was no need for them to show off. Lots of civilians are hurt.” Mason sounded irritated, perhaps because he wasn’t the hero this time around or perhaps he truly did care for those people he didn’t know.
Amazed by their abilities, wherever they were, Skylar was grateful for their showing off. Though Mason claimed he’d had the situation handled, Skylar thought otherwise, but kept her opinion to herself.
Fire and heavy smoke spiraled into the sky behind them. The trucks had mostly slammed against each other, except for one. Guilt consumed her, thinking about the innocent people who’d happened to be in the wrong place at the wrong time. She couldn’t dwell on her remorse. She saw the same white truck, now joined by a black truck, tailing them. “It’s the white truck again, but there’s another one behind it.”
“I see them,” Mason said with a sly tone, looking in the rearview mirror. “Let’s see if they can follow.” 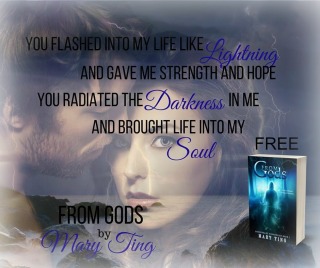