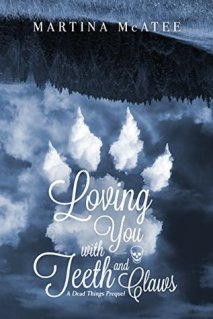 Loving you with Teeth and Claws is a prequel to the current Dead Things series.  It promises to be the backstory of Wren and Isa, what it delivers is just so so much more!  Whilst yes, it is the story of how Wren and Isa came to be a couple it’s also very much Neoma’s story too.  It’s fair to say that you don’t have to have read the earlier books in the dead things series to understand what is going on, but I think as a reader it’s a massive bonus to you if you have.  The reason they are all so protective over Neoma, the fact that they are all so incredibly tight knit – it all starts here and the payoff is fantastic.  My heart wrenched at Neoma’s history whilst I was also laughing out loud at Isa’s first reaction to Wren.  I loved the fledgling phases of several of the future relationships in this series and also the cracks starting to show in others.  It’s clear that from early on Isa had her hands full with the younger members of the pack and the trouble they would get themselves into – wren has impeccable timing!  I have to admit that I read the slightly more steamy version that was released into the Venom and Vampires box set and there was a lot of hand fanning going on, but that ultimately felt a distraction to the intricate story and I found myself wanting to get back to what was really going on with Neoma and the others.  It would be lovely to have maybe some short stories about the scrapes the younger ones got themselves into during this period or even now as flashbacks in future books as this story reveals a different side to all of them in a totally endearing way. I’m excited as I know book 3 in the series is coming soon and I glad I’ve now read this as I think it gives me a deeper understanding of what brought them all together to be the pack they are today ❤ 5*