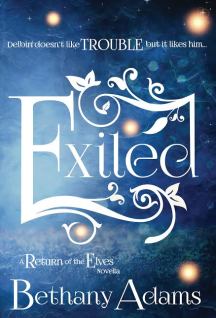 Spanning the gap between Sundered and Seared, Exiled is a lovely light read full of the usual expansive world building, beautiful Morananian language and general gorgeousness I have come to expect from the series. It introduces us to Delbin, an exile from Moranania who has been on earth for over 100 years, and Inona who is a Morananian scout tasked with checking in on those who have been exiled.  But with Kien on the run on Earth, a quick check in for Inona leads to a world of trouble!
Although a Novella, there is a lot going on in Exiled and I feel like it’s setting up Seared quite nicely.  Kien’s involvement  brings an exciting twist with the poisoned magic still going strong on Earth despite the efforts of Lyr and the others back on the other side. Delbin has more going on that it first appears and I’m sure that he and Ralan together will be a real force to be reckoned with in the future.  I’m also loving the new laid back Lyr at the moment, i’m guessing that all these elves who have spent a while on Earth are rubbing off on him!
It would have been nice to have had a bit longer with Delbin and Inona and I’m hoping that their story continues in following books in the series.  Roll on Seared!