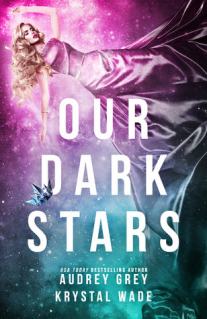 Talia is a Starchaser.  Eldest sibling in an ailing dynasty her 18th birthday should be a time to celebrate, however, it marks her shift in adulthood and sovereign in waiting.  Her first task?  She must accept a betrothal to the cruel Cassius, a lesser match but from a planet rich with Ore.  Up until this time Talia has had a steadfast companion to share her dream, not a human but a “mock.” a humanoid droid named Ailat.  When Cassius forces her to chose between saving her family and saving her best friend, Talia makes the only choice she believes she can.  Her choice is far reaching and through a series of events Talia finds herself in an escape pod, floating into space.

100 years later, Will Perrault and his rag tag crew of misfits are on the hunt for salvage and after discovering Talia’s pod they suddenly discover that they are targets with some very high profile hunters on their tail. A lot has changed since that fateful night for Talia and the tables have turned completely as mock became master and human became slave.  As Talia awakes she cannot even begin to comprehend what has happened. As the truth of both the length of time Talia has been in stasis and the uprising of the mocks unfolds before her, Talia must fight to put right the wrongs of that terrible night.

Our Dark Stars is a gorgeous read, from the beautiful cover design to the words themselves.  Talia is a wonderful character, full of both strength and vulnerability, she is able to hold her own and put aside her fears and grief to put right her wrongs.  The chapters covering the fateful night 100 years prior are full of real heart pounding and also heartbreaking moments as Talia must choose between loyalty to her family and loyalty to her friend.  Will’s crew are a great bunch of characters, if you were a fan of the show Firefly you will find a lot to love with them as they bring humour to the darker sides of this story

Whilst I saw the reveal coming a mile off, it didn’t spoil the enjoyment of the moment, which was terrifying in the face of how Talia came to be in that position.  Our Dark Stars has some truly epic moments from space battles to strip clubs, but it is also a story about friendship, betrayal and redemption and how hope can be found in the most unlikely of places.

I really loved this book, I read it in 2 sittings and struggled to put it down.  It’s such an easy read, page after page just flow together – i’m glad the story was rounded off well but i’m also intrigued that there could be more of these characters story to come.