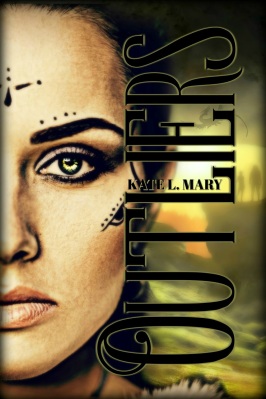 Blurb:
In the dusty ruins of the world, three groups exist: the Sovereign, the Fortis, and the Outliers. Within their walled city, exclusive access to the only remaining technology gives the Sovereign an advantage that seems impossible to beat. In exchange for meager scraps and free reign outside the walls, they use the brawn of the Fortis to their advantage while the Outliers struggle to survive. Living on land that has not healed from the poison of the past, and surrounded by dangers too numerous to count, the Outliers have adapted – but to the Sovereign and the Fortis, they are nothing.
Indra is an Outlier. Each day she braves the wastelands, making the dangerous journey from the wilds where she lives to the City so she can serve the Sovereign in order to give her family a better life. Inside the walls, she has no rights and no freedom. Not only is she powerless to resist the Sovereign’s harsh rule, but she is also unable to do anything to save her people from the brutality of the Fortis. For centuries they have made their abuse of Outliers a sport, but when Asa comes to Indra’s rescue, she sees something different in him. Something that marks him as so much more than just a Fortis guard.
But as Indra’s world begins to unravel, even the quiet alliance she has formed with Asa cannot save her from the wrath of the Sovereign. In one life-altering moment, everything Indra has ever known is ripped away, forcing her to face a world even more harsh and unforgiving. Broken and scarred, Indra finds herself on a journey that will challenge everything she’s ever been taught, learning along the way that she’s stronger than she ever imagined. Maybe even strong enough to free her people forever.